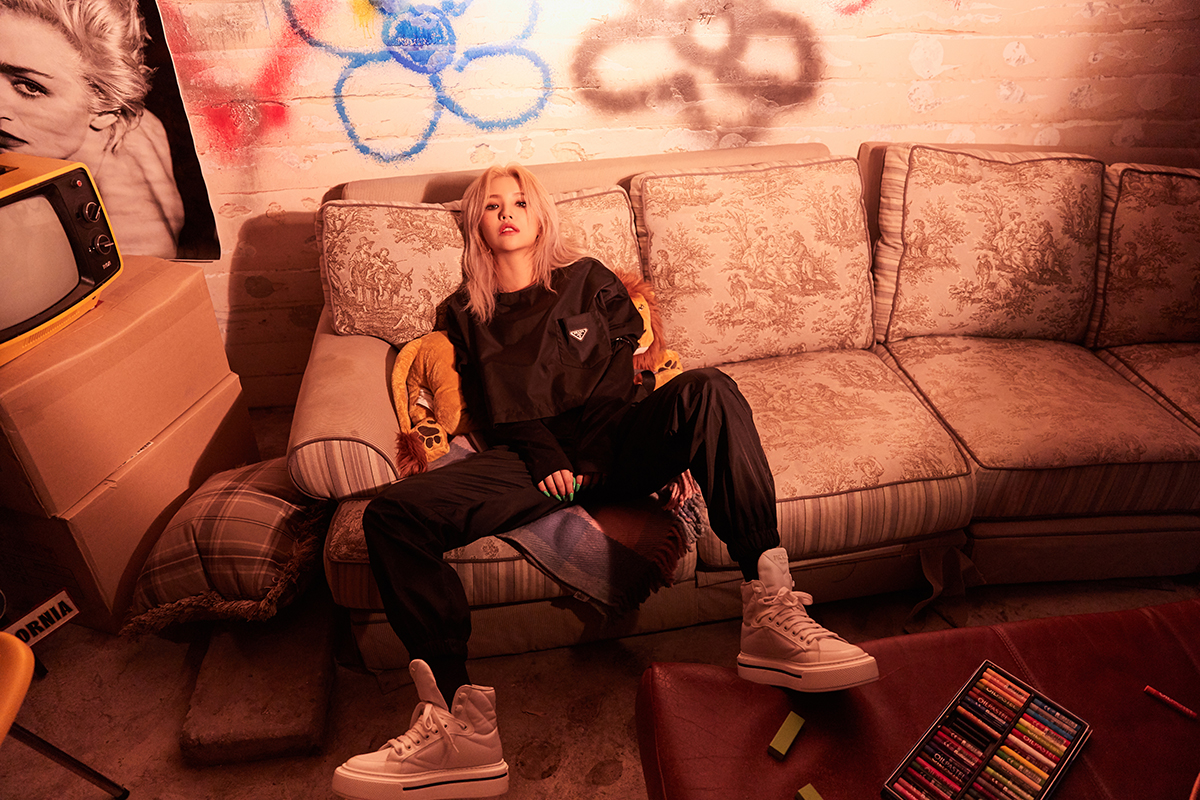 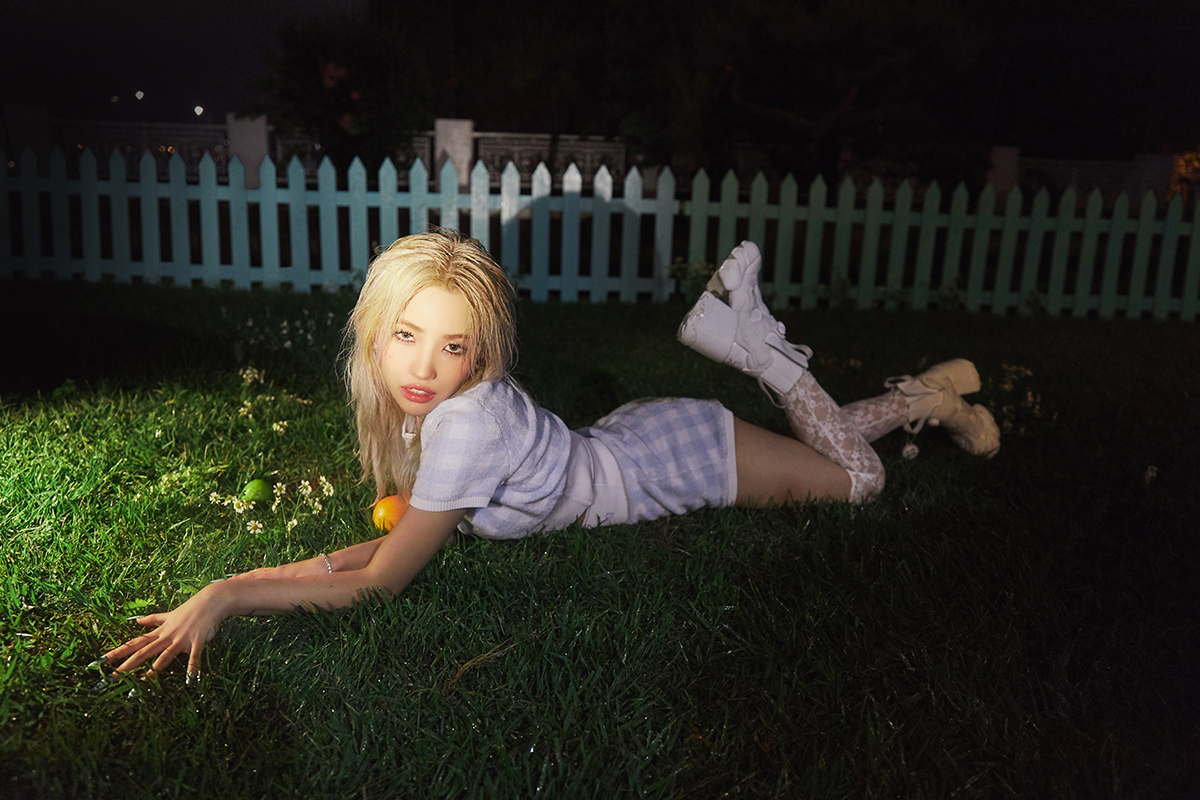 Jeon So-yeon is perfect. The image that comes to people’s mind when they hear “perfection” is of something immaculate and sleek, such as the surface of well-coated luxury chocolates. Jeon’s perfection is something different. It mercilessly pierces the audience’s heart like a phalanx of ancient legionnaires marching with long spears, and soaks their pierced hearts with catharsis. That is the perfection delivered by Jeon So-yeon.

Jeon’s music has pain and thrill. She creates music by touching on “burns I got alone during the days that were not hot (HWAA (火花))” and incorporating everything from her life. She said, “I have a slump every time I release an album. I am not sure whether I can make something better next time since I put everything into it” (interview for the July 2021 issue of VOGUE KOREA). Her music looks higher, not further. While singing “Oh my god, she took me to the sky (Oh my god),” she is gesturing toward somewhere higher. Hence, it sometimes feels sad. It is wrong to evaluate her music as “ethnic.” Her music is ritual (祭儀).

“I NEVER DIE (2022),” the first album in four years since her debut after a long hiatus of (G)I-dle, was made by Jeon with her commitment of “Those who seek death shall live. Those who seek life shall die (生卽死 死卽生).” It is the most “perfect” album with the deepest “pain and thrill.” So far, Jeon’s music has had the spirit of “risking death,” while “I NEVER DIE” is relentless with her firm resolution “to kill or to be killed.” The album art and the music video of “TOMBOY,” a title song, pay homage to Quentin Tarantino’s film “Death Proof (2007).” The album is filled with the metaphor of “seeking death.” Some taboo-breaking lyrics such as “fucking tomboy” and “I like to sex” are added to the CD version of “TOMBOY,” proving that (G)I-dle’s music is not the music of “girls” or “female idols” and has the strength and dignity to fight back relentlessly and conquer beyond limits.

“Those who seek death shall live. Those who seek life shall die.” Thus, Jeon never dies. She always creates music, risking death.

Jeon competes. She participated in some of the most brutal TV competition programs, such as “Produce 101,” “Unpretty Rapstar,” and “Queendom” in Korea, a country where the winner takes all, and returned as a hero. She considers competition to be positive, saying “I like to compete. I like being pushed to the limits. In such situations, I can do something I have not been able to do. I am firing up to be the best” (interview for the January 2020 issue of GQ KOREA). Her manner of competing is noble. She competes with her life on the line for honor, not to be ranked.

In “Produce 101 Season 1” (2016), she made an impression with her rap, challenging the K-pop female idol universe, which enforces being “pretty” as a merit and standard. The lyrics of the rap that she wrote herself and showcased to the world for the first time say, “They say I’m a girl who will do something. Always convinced. No matter what they say, I’m never ashamed of what I do.” Many rappers made resolutions that they could not keep, influenced by the hottest spotlight and mood in competition programs. However, Jeon has always done “something” and created convincing music as she first promised on the stage that was as high as a colosseum, looking over 101 chairs. Although she did not take the throne in “Produce 101,” what people remember is not her final rank but her presence.

In “Unpretty Rapstar Season 3” (2016), she participated as a teenage idol trainee who had not debuted yet and showed her unrivaled performance and ambitious music among other adult professional rappers without becoming anxious or stuttering on any rap verse. She broke the chains of prejudice and limits against “female idol trainees” and established her presence, which cannot be determined on the basis of the dichotomy of “pretty” and “unpretty.”

In “Queendom 1” (2019), she became a legend. An ambitious opening performance by (G)I-dle, who debuted a year ago, started with Jeon’s rap “Hello, everyone. Since everyone here is busy, we introduce ourselves with a performance. We are a bulldozer like a comet (...) Yes. Bring me that crown.” and served as a prequel that has engendered the identity of “survival of the fittest” in competition programs following “Queendom 1,” such as “Road to Kingdom” (2020), “Kingdom: Legendary War” (2021), and “Queendom 2” (2022).

Then, there was the final performance “LION.” To focus on “LION,” this author turned off all the lights in their home, stopped the washing machine, sat straight up before the performance, and watched Jeon wearing the crown. When she shouted “I’m a queen!” at the climax of the song, it felt like something ended in the world. Indeed, something did end on that day. Then, something else started. Breaking free of the closed “lineage” of the empire of K-pop female idols who look pretty regardless of who looks at them, who are backed by large talent agencies, and who have a submissive attitude while suppressing their musical ambitions, Jeon was crowned, beginning a new chapter in K-pop.

Jeon denies it. The music video of “TOMBOY” ends with Jeon drawing an x on the graffiti “The Queen.” In IS THIS BAD B****** NUMBER?, a song in her solo album WINDY (2021), she says “Is the idol rapper who leads Z a king or queen, or who” and denies the gender distinction, proving she is Jeon So-yeon, rather than a rapper “who is good despite being a girl.”